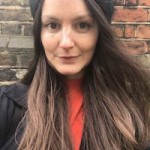 Dr. Ryann Donnelly holds a practice-based PhD from the department of Visual Cultures at Goldsmiths, University of London. Her research is concerned with modes of gender subversion in music video, while her practice culminates in video used as projections during her live music performances, to propose queer and feminist themes. Her thesis will be released early 2019 on Repeater Books under the title, Justify My Love: Sex, Subversion, and Music Video. Donnelly has also contributed to publications such as Art in America, Interview Magazine, and PAJ: A Journal of Performance and Art.

Donnelly curates a mixed arts night at performance space, VFD in London, and continues to perform across various arts platforms. Recent performance credits include Robert Wilson’s Works and Process Series at the Guggenheim Museum in New York, David Cronenberg’s film, Body, Mind, Change featured in director’s retrospective at Toronto International Film Festival, and Saint Genet’s Flinch Not and Give Not Back at WUK Performing Arts in Vienna. She has exhibited internationally in the UK and US in a range of media: video, photography, installation, and sculpture. Donnelly acted as lead singer of Seattle-based band, Schoolyard Heroes, signed to Stolen Transmission, an imprint of Island Records from 1999-2010