From London to Nigeria and back again….

Ade Solanke lives in Stoke Newington and will be interviewing Noo Saro-Wiwa about her Nigerian travelogue Adventures in Transwonderland on Sunday 3rd June at 5pm. Tickets on sale here: http://www.stokenewingtonliteraryfestival.com/snlf_events/looking-for-transwonderland-with-noo-saro-wiwa/

What the reviewers are saying about Pandora’s Box:
Nominated for Best New Play in the 2012 Off West End Theatre Awards
“I have approximately 500 words in which I can review this play and all I want to write is ‘absolutely brilliant’ 500 times.” The Public Reviews
“Buzzes with life.” Lyn Gardner, The Guardian
“Ade Solanke’s play is firecracker theatre … as touching as it is hilarious,” Jonathon Watson, The Stage. 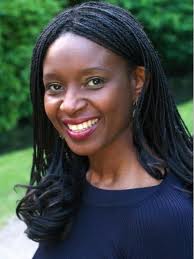 Ade Solanke, whose play Pandora's Box is currently showing at The Arcola Shed

Pandora’s Box is my first stage play (although I’ve been writing for twenty years) and is about British-born Africans taking their children ‘home’ to Africa or the Caribbean. My play is set in Surulere, in Sunny Lagos, in the home of telecoms entrepreneur and socialite, Sis Ronke. She’s what you call a ‘Lagos Big Girl’ or ‘Cash Madam.!’ An ‘It-Girl’ basically. Her London-born sibling is there wrestling about what to do with her son who’s going astray.

Most kids who go for schooling in Africa want to go and do so successfully. But ‘transportation’ of troubled kids to Africa or the Caribbean against their will is also happening in a big way – as you read this, parents are planning Summer holiday trips for their teens that may end of lasting not two weeks, but two years!

The phenomenon is a response to the increasingly dangerous nature of life for young African-heritage kids, especially males, in our inner-cities. But is it the right thing to do? The play looks at a mother who wobbles about the decision she’s made, hours before she’s due to fly back to London, about leaving her streetwise son in a strict Lagos boarding school. And strict means strict! Victorian, Dickens-style strict!

The play arose from many sources, The scene when Mrs Kane signs the young Charles Foster away in forties melodrama, ‘Citizen Kane.’ She was so flinty-eyed and certain! Chilling! The1990’s sitcom, The Fresh Prince of Bel Air,’ . The biblical tale of Moses’s mum hiding her baby son among the reeds and allowing a stranger to take him in, to spare him from the slaughter being visited on the newborn males of her tribe. Anxious mothers, all of them, as are we mothers of African-heritage males in England. What are their life-chances here?

Then there was that moment at Lagos Airport in 2006. The arrivals lounge full of kids with English accents. Shouldn’t they be in departures, I thought, on their way back to England for the start of term?

But they were in Nigeria for school – British-born African diaspora kids whose parents (several British-born too) had opted to educate them in Africa. Some kids had been plucked out of prestigious schools. Why?

Those encounters sparked this play, along with the many conversations with friends who, like me, have wrestled with the question: where is the best place to raise a British-African child? Raising my son, I spent years weighing up the pros and cons of Europe, America and Africa. I was born and raised in West London, both my parents are Nigerian, and I’ve lived in Los Angeles. So I had an insight into three continents.

But this is a story made in Hackney, where I raised my son (now 22) for most of his life. Why has a local story been so successful? Maybe, it’s that universal human subject of a parent struggling to do what’s best for his/her child?
But it’s the first time the drama of sending a child back home to Africa has been set on the British stage. We see lots of plays about troubled teens, but few about the lengths their parents go to rescue them. So it’s also a story that’s never been told before. Why not?

Because we, the first generation of British-born Africans, are only now coming of age to tell it. These challenges, these dilemmas are happening to us here and now, for the first time, as we raise our kids in this environment. And our coming of age as parents coincides with the new era of Africa rising, and presents us with delicious dilemmas and juicy conflicts: here and/or there? It’s a story treasure trove! Now it’s time to reflect on these issues, to dramatise these choices, and share our unique stories with the world. And delve into the still untold stories of our parents who came here in the fifties and sixties.

That’s my mission at Spora Stories. We hope to see you at our show!

Pandora’s Box is on at the Arcola Tent until Sat May 26th. Special post-show panel debate on African Arts in the UK and beyond on Sat at 5pm following a matinee at 3pm.

Ade Solanke is a playwright and scriptwriter. Her passion is for great stories, well told. Her company, Spora Stories, makes drama about the ‘Afrospora’ (African diaspora) experience. She is currently Pinter Centre Writer-in-residence at Goldsmiths, University of London.