It started with a pink poster…

I moved to Stoke Newington 3 years ago, and when wandering around trying to work out which cake shop was which, where to get the best coffee and just exactly how many vintage clothes shops one small part of London needs, I came across Stoke Newington Bookshop.

‘Oooh, that’s a rather pink window. I wonder what’s going on?’ On closer inspection, I discovered it was devoted to Stoke Newington Literary Festival. At first, I thought it was a bit ridiculous, until I remembered I was in Stokey and a literary festival here made perfect sense.

I picked up a programme and saw one of my favourite authors, China Miéville, was taking part. He was in conversation with someone I’d never heard of, Jon Courtenay Grimwood. I almost didn’t buy a ticket, I had no idea who that interestingly named chap was. But then I thought I’m on a journey of discovery around Stoke Newington today, I might as well expand my literary horizons too. I went along and as well as being very impressed with the bright pink branding – I loved the crew t-shirts – I now have another favourite author.

When last year’s programme came out, again I was faced with a mix of the known and unknown. I took a chance on Dan Rhodes, mostly because Stewart Lee was hosting. It was fantastic, Dan was absolutely hilarious and I loved the books I bought (and got signed!).

I’d vaguely heard of Dan Cruickshank, and as someone with a keen interest in architecture I snapped up a ticket and again had a great time where I got to see some of the UK’s finest buildings normally hidden from the public. As a big fan of beer of all kinds, I couldn’t resist Pete Brown’s beer and book matching – I didn’t know who he was either (sorry Pete!) but discovered a lot of good beer and a hugely entertaining beer writer.

I’d urge everyone who might be unsure about an event to go anyway! Think something sounds interesting but aren’t sure who the speakers are? Take a chance, discover someone new and have a great time in the process.

And now, the third year of Stokey Lit Fest! I find myself smack bang in the middle of the action, being worked very hard by Captain the dog, I’m sorry, Liz, the Director, (but we all know who is really in charge here!) working behind the scenes. I love getting stuck in with the planning of this fantastic event, everything from doing the washing up to getting the word out in the press, Tweeting about coffee and the dog, writing letters to some of my literary heroes and dealing with their stressed out publicists. I’m getting rather star struck. I’d encourage anyone with a bit of spare time coming up in June to help out. You get access to a lot of beer, gin, and a brilliant dog. Sadly though, the t-shirts are no longer pink. 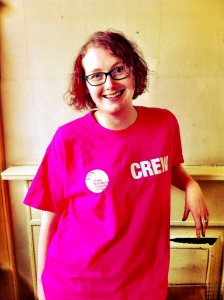 Me in the much missed pink t-shirt from previous fests

My picks
On Saturday, Justin Cartwright & Jonathan Lee: London Novels (12pm, £5). Some of my favourite novels are set in London, and they’ll talk about our great city and their critically acclaimed novels in which it stars.

The Olympic Legacy with China Miéville, Iain Sinclair, Laura Oldfield Ford and Ken Worpole (2pm, £6) The Olympics are going to have a huge effect on our city in a few weeks time – but what will happen afterwards?

On Sunday, Joe Dunthorne (3pm, £5), author of Submarine, recently adapted into a hit film, will read a Chose Your Own Adventure where the audience decides what happens.