“The chief person of horrible visiting”

The Observer’s This Much I Know interview is a firm favourite at Litfest Towers: how other people edit their experiences, where their lives have taken them and what they’ve distilled into their own personal nuggets of wisdom. With full credit to The Observer and Mark Townsend, Lindsey Hilsum’s interview appears below. 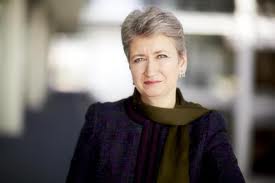 As soon as we saw Lindsey Hilsum’s new book Sandstorm, her eye-witness account of the revolution in Libya, we knew it would be a must-read. The fact that she lives in the ‘hood sealed the deal.

Lindsey traces the history of the strange Libyan regime from its beginnings – when Gadaffi had looks, charisma and popular appeal and posed as a kind of socialist revolutionary – to its paranoid, corrupt final state, symbolized by the massacre of prisoners at Abu Salim prison.

At the heart of her book is a compelling narrative of how Libyan people overcame fear and disillusionment and found the strength to rebel. She follows five of them through months of terror and tragedy, bringing intensely personal and previously untold stories into the public domain.

Sandstorm is powerful reportage: humane, historically-informed, beautifully-written and full of details that only a writer close to the action could have noticed.

Lindsey will talk to Suzanne Moore about the book and her extraordinary life on Saturday 2nd June at 6pm in Abney Public Hall. Tickets here.

This Much I Know, with Lindsey Hilsum
The Observer. Interview by Mark Townsend

Having grey hair is a good thing. I am taken more seriously, partly because it’s obvious you’ve been around a fair bit. The notion that television only likes young women is not true.

My first story came from Central America. I wandered over by myself, typed it up and posted it to The Guardian. It was published several months later because it took a while to get there.

The process of growing older is of forcing yourself to remain open-minded. The easiest thing to be is close-minded, to think that you know it all because you’ve been there. Some people drive me mad. They sit and theorise, finding a story to fit their beliefs. That’s totally wrong.

To go out and start reporting is much more difficult and dangerous than it was. Iraq is the most dangerous conflict any of us have covered.

What gets me about Iraq is that everybody I knew there before the war wanted it, because they said nothing could be worse than living under Saddam. We had a government minder called Mohammed. He was very happy when the Americans came into Baghdad. Within a day he had to save the life of a little girl who had been shot by the US Marines. In December 2004 he was kidnapped as he was preparing for his wedding. I haven’t heard from him since.

I dealt with those early days in Rwanda at the start of the genocide on my own. That taught me that I can cope in an emergency by myself. You witness the depths of what humanity can do and you know it’s nothing to do with race or religion, it’s a deeply human thing.

The worst journalists are people who go to places knowing what’s right and what’s wrong, which side is good and which is bad. You have to be prepared to have your expectations overthrown.

Under pressure, people will murder their neighbours because they are told to do so. Few people will resist that. People would say, ‘Gosh, if you’d been one of those Hutus in a village do you think you would have been the one to stand up and say no?’ As an article of faith you would have to say yes, you believe you would’ve stood up and done the right thing. I didn’t need psychological help, I needed philosophical help, because that left me completely blank.

If you see lots of really dreadful things it distances you from people who have not.

I recently told my taxi driver I’m off to Paris because I’m fed up with visiting tough places. He said: ‘You really are the chief person of horrible visiting.’ I thought: that’s my epitaph, isn’t it?

I have a Rwandan friend who is a survivor of the genocide. Her whole family was murdered. She did a course in counselling students. I asked her how she could cope with students whingeing about their boyfriends and so on. She said, ‘There is no hierarchy of pain. You mustn’t judge that somebody else has suffered more.’ One tries to learn from such an amazing outlook.

Journalism only scratches the surface. Certain things can only be expressed in, say, poetry or drama. Frequently I’m in situations where I see human dilemmas and if I had the ability to write poetry I would be able to express this much better.

Working as a foreign correspondent is like being unfaithful – I feel guilty about stories and people I leave behind. Iraq most of all. Rwanda too. I don’t forget, but essentially journalists move on. It’s always a search for something new. Now I’m uprooting and going to be Channel 4 News’s Beijing correspondent. So I’m starting from scratch again in China. I have a knot in my stomach, but maybe it’s good to be frightened again.

Psychologically I’m quite optimistic and philosophically I’m quite pessimistic, which sort of means one carries on. Politically, things can be done, genocide can be prevented and individuals can learn from history. Fundamentally, though, humankind is pretty crap.