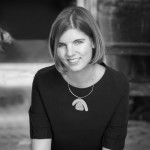 Born in Scotland, Elizabeth Macneal is a potter based in Limehouse, East London, working from a small studio at the bottom of her garden. She read English Literature at Oxford University, before working in the City for several years. In 2017, she completed the Creative Writing MA at UEA where she was awarded the Malcolm Bradbury scholarship.

Her debut novel The Doll Factory won the Caledonia First Novel Award and will be published simultaneously in Spring 2019 in the UK by Picador, who won a 14-way auction for the title, and Simon & Schuster / Emily Bestler Books who snapped up US rights in a significant deal.