Kostya Tsolákis is a London-based Greek poet, translator and journalist. His poems have appeared in Magma, perverse, Strix, Brittle Star, The Fenland Reed and The New River Press 2019 Anthology. In 2018, his translations of the Greek gay poet Andreas Aggelákis were included in the LGBTQ+ issue of Modern Poetry in Translation, ‘The House of Thirst’. He founded and co-edits harana poetry, an online magazine for poets writing in English as a second or parallel language. He lives locally, on Petherton Road, which marks part of the course of the New River. 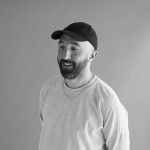